Join us for an extraordinary community afternoon as we celebrate and learn about the role of women from Biblical times right up through our own history.  Rabbi Bellows and Cantor Belinda will lead this special Seder with the help not only of members of the Mavens and the Adult Education Committee, but with the assistance of everyone in attendance as well.

We invite you to a CBSRZ Fundraiser! Come taste the wine, stay for the raffle, the silent auction, dancing and delectable eats. Adults, 21 years and over, will sample a selection of wines from some of our favorite local wine merchants.

Did you miss our historic 2015 tour?  Join us on our CBSRZ Heritage Tour, Take 2!  We’ll visit resorts, synagogues and farms of Chester, Deep River and Moodus… learn more and reserve your spot!

We’re looking forward to learning and noshing with you for the entire weekend… learn more and save your spot!

Rabbi Marci Bellows and the Adult Education Committee welcome you to a three-part presentation series:  Islam: History, Practices & Beliefs which seeks to deepen our understanding of Islam, something increasingly crucial for all of us as Americans, as global citizens – especially in these tumultuous times.

This is a free series.  We kindly request that you register in advance.

Overview of Islam, tenets, values, practices with a look, as well, at the role of women in Islam. Presented by Mrs. Aida Mansoor, Past President and board member of the Connecticut Muslim Coalition.

The history, culture, divisions within, governance, leadership, and jurisprudence of the Muslim world, presented by Imam Refai Arefin, member of the Connecticut Islam Coalition and Assistant Imam of the Berlin Mosque.

Islam today, a contemporary view of Islamic leaders, the spectrum of Islamic beliefs/practice and attitudes both toward and of Muslims (including Anti-Semitism and Islamophobia) and the effect on the Islamic community of these difficult times, presented by Dr. Reza Mansoor, founder of the Connecticut Muslim Coalition and author of Stigmatized! – From 9/11 to Trump and Beyond; An American Muslim Journey. 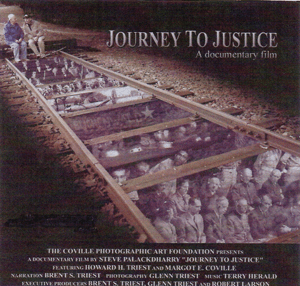 Journey to Justice tells the story of Howard Triest, a German Jew who fled Nazi Germany in 1939 at the age of 16, returning as an American soldier and then serving as an interpreter during the Nuremberg Trial. He cam face to face with imprisoned Nazi leaders who were responsible for the death of six million Jews, including Howard’s parents. At Nuremberg, Howard felt transformed, from victim to victor, and was able to reclaim parts of his German identity.

The documentary also tells the story of how Margo (Coville), Howard’s younger sister, was rescued from a detention camp in southern France just before her parents’ deportation in August of 1942. Margot later helped save 10 other children from the Nazis in her subsequent escape to Switzerland on her 14th birthday in 1943.

Journey to Justice was filmed in five countries and features extensive archival research and images including historic film and photographs shot my Howard himself. This film is a personal journey of the Triest family, a family portrait set to film. It is an intimate story of loss of family and identity. The film recounts events through Howard’s own words as he revisits, at the age of 83, the sites of his experiences in Germany accompanied by his sons Brent and Glenn, who are essential witnesses to Howard’s retelling. A the title and continual use of the words “retribution” and “redemption” suggest, this is a film about closure and connection. It is a film that exemplifies how telling our personal stories can provide closure from trauma and healing on a larger community level.